1971: India helps Bangladesh free itself from brutal Pakistan.
2001: Bangladesh returns the favour - sending back the mutilated bodies of BSF soldiers tied up like they were game gathered by the maharaja's hunting party.

(Image from Sify)
2009: Bangladesh Rifles in the news again 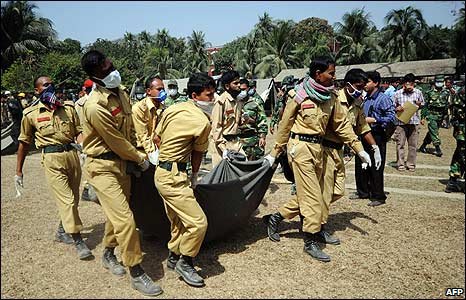 The number of dead bodies in the grave could rise as the search continued, fire service operations chief Sheikh Mohammad Shahjalal said.
“It’s beyond comprehension how one human could have done this to another. They not only shot them dead but some bodies were badly mutilated with bayonets,” he said.

I wonder why nobody in Bangladesh asked this question in 2001. Maybe they don't consider citizens of a "Hindu country" as humans?

It has been known for some time that Pakistan's ISI has had a free reign within Bangladesh for creating trouble in India. If it is proved that ISI (or some other Paki organization) is behind this mutiny, will Bangladesh kick ISI out of the country? Or, will it try to "forgive" this mutiny and show some other reason?
Posted by Lumbergh-in-training at 10:09 PM 1 comment: Links to this post