Debunking oppostion to theory of evolution 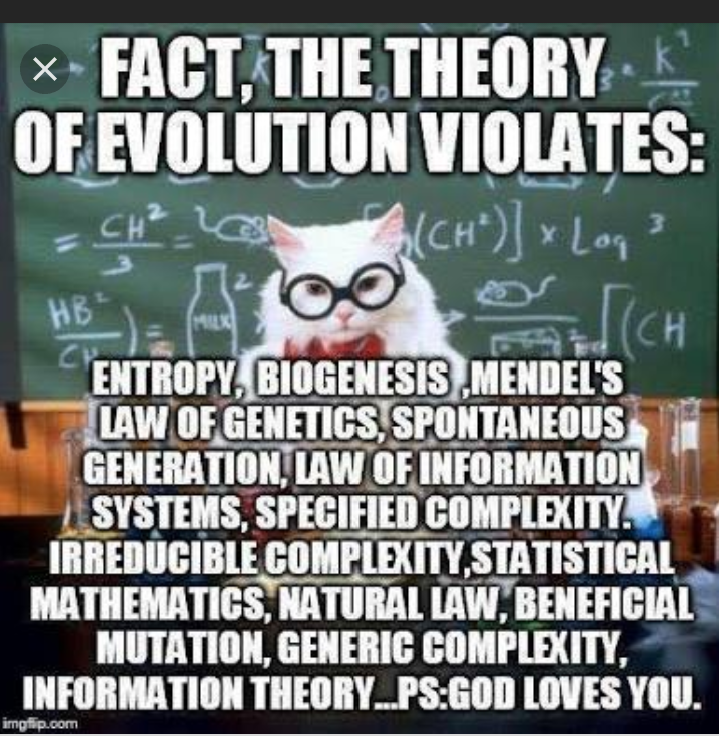 * Entropy is a property of the Second Law of Thermodynamics, which Evolution doesn't violate because while order rises in genetics (a local decrease of entropy) while the Sun slowly marches toward eventual heat death (a massive increase of entropy). This argument is tiresome. * Evolution has nothing to do with biogenesis directly, and there is no "law of biogenesis" for it to violate. The processes of the first biological life are irrelevant to changes in genetics. * Mendel's studies of genetics now have a hundred and fifty years of further science for us to enjoy! What a world. They're now part of a larger set of biological rules that are firmly and happily a part of Evolutionary Theory. * Spontaneous Generation died thanks to Pasteur and this is a rehash of the biogenesis one. * The "Law of information systems" is something creationists made up using and DNA is not an information system. * Specified complexity / irreducible complexity are *creationist* laws with no relevance in biology. There are no "irreducible" systems in nature, we can see clear paths of evolution for the eye, wing, and other complex biological elements. So yes, this one is true, Biology directly violates these "laws". * Statistical Mathematics: no idea how evolution is supposed to violate this, unless you just think evolution is so incredibly unlikely as to be impossible. * What's Natural Law? * There are clearly beneficial mutations. * Everything I can find on "generic complexity" says it may change ideas in Evolution, expanding the theory and filling in areas we still don't understand. Which is how science works. * Information theory is a repeat of the Information Systems / Beneficial Mutations items, saying that new information can't arise in evolution, which it obviously can. These are just a rehash of old creationist claims based on old ideas of classical biology and misrepresentations.
Posted by Lumbergh-in-training at 1:14 PM No comments:

If you are like me and have camera problems when opening google meet (or any other meeting application) and see only a youcam logo, the problem is with Youcam drivers.
The solution is Disable CyberLink YouCam driver:

Next time you open google meet, you will see the computer's default webcam as the input device.

Happy Meeting!!
Posted by Lumbergh-in-training at 9:46 AM No comments:

It was on this historic day, 103 years ago, the foundation was laid by three leaders of the Dravidian Movement under the banner of South Indian Liberal Federation, popularly called as Justice Party, for the development of Dravidians (non-brahmins) in Tamil Nadu.

The poor people belonging to Dravidians find it to stay and to pursue their college studies in Chennai. They were barred from staying and dining in the hotels run by brahmins. This was the condition at the beginning of the 20th century in Tamil Nadu.

It will be worth mentioning that Sir R.K.Shanmugam, the first Finance Minister of the Indian Republic, S.Subramanyam, the Judge of High Court, T.M.Narayanasamy, Vice-Chancellor of Annamalai University, all of them stayed in the Dravidian Home founded by Dr.C.Natesan.

Sir Pitty Theyagarayar and Dr.Taravath Madhavan (Dr.T.M.Nair) understood that then Congress party is dominated by the brahmins of South India and doing injustice to the Dravidians. They kept aloof from the activities of Congress. But the “Home Rule” movement started against the interests of the Dravidians (non-brahmins) forced the non-brahmin leaders to oppose that movement.

These two leaders were at loggerheads in the Madras Corporation Council and Dr.C.Natesan mediated with them to bring about a rapprochement. Sir Pitti Theyagarayar and Dr.Taravath Madhavan gave up their personal conflicts and came together for a great cause of Dravidian empowerment.

On 20 November 1916, Dr.C.Natesan, Sir Pitty Theyagarayar and Dr.Taravath Mathavan along with about thirty prominent non-Brahmin leaders met in Victoria Public Hall, Chennai and established the South Indian People's Association (SIPA) to publish English, Tamil and Telugu newspapers to publicise grievances of non-Brahmins.. The meeting also formed the "South Indian Liberal Federation" (SILF) as a political association. Later, the association came to be popularly called the "Justice Party", after the English daily Justice published by it.

NO elected State Chief Minister (in power or out of power) in India will ever dare to get into a open confrontation with the Indian Army.

NOT even in Kashmir valley.
NOT even in Manipur or Nagaland.
No politician will dare. But Kalaignar Karunanidhi did it. He breached the most important military protocol.

Chief Minister M Karunanidhi made sure that there was no one in Madras city, India to welcome the Indian Army troops returning from Sri Lanka in 1990 because of the gross human rights violations committed by the Indian Army on Sri Lankan Tamil civilians in its capacity as the Peace Keeping Force in Sri Lanka.

Such was the Dravidian valour of M Karunanidhi and such was his love for Tamil people.

The Indian Army was deeply hurt. It took it as the greatest insult in its history. For the next 3 generations till date, hatred for M Karunanidhi has become an institutional learning for the Officer class in the Indian Armed Forces.

Talk to any White Thread Savarna Army Officer (retired or serving) and you will realise the extreme contempt they hold for M Karunanidhi.
Here is Colonel (Retd) Ajit Bhinder tweeting on the day of M Karunanidhi's death so that Twitter doesn't mourn the passing away of the Dravidian statesman.

A lifelong warrior for Eelam Tamils of Sri Lanka, M Karunanidhi is being falsely accused and casteistly abused by the very people whose liberation and progress he dedicated all his life based on venomous rumours from WhatsApp university.

Just look at the extreme level of hatred over M Karunanidhi on the internet, Big Media and everywhere else.
All that has happened in these 10 years (Sri Lankan Civil War ended in 2009), is toxic poison injected into the general public in every medium possible against M Karunanidhi.

The very Dravidian youth in India (first generation college graduates) who should be thanking M Karunanidhi for empowering them through Social Justice schemes against 2000 yr Manuwaadi oppression, are instead abusing him so badly because they believe M Karunanidhi killed 150000 Tamils in Sri Lanka based on Facebook and WhatsApp rumours.

Anyone with a little bit of conscience will know that M Karunanidhi is NOT at all the reason for the death of 150000 Sri Lankan Tamils in the 2009 Sri Lankan Civil War between the Sinhalese Buddhist Supremacist Govt and the Liberation Tigers of Tamil Eelam.

But everyone keeps quiet when thousands and thousands (or should we say lakhs??) of Tamil youth in India are brainwashed in every type of medium possible that M Karunanidhi killed 150000 Tamils in Sri Lanka.

Everyone who is mute in this gross crime is equally culpable as the Casteist Forces that want to exploit this rumour to the very hilt.

Is it really so hard to see through this simple thing???

You know what your heart says.
Posted by Lumbergh-in-training at 6:53 PM No comments:

At the end of the day, it's not our country. So if we're made redundant, we have to go home.

Posted by Lumbergh-in-training at 8:38 PM No comments: